The tune played on an old ’45 in a BMI jukebox in Dodge City, KS. And last week, it sprang to mind for John Deere’s 175th Anniversary Celebration in Cary, NC this week. Might even spring again for this weekend’s gig with Southern Culture on the Skids at Ziggy’s Saturday.

“High Planes John Deere Cowboy” was written by a Topeka, Kansas school teacher named Terry Sherman and it’s a fine piece of documentary-lyric-making about the Kansas cowboy circa 1970s.

This song is an historical redneck ballad to riding the combine. And eating pickled eggs. While wearing alligator boots. Other side is a surprisingly dirty outlaw-country fantasy. Here’s the kicker though. I am pretty sure sure that ‘Terry Sherman’ is a high school teach in Topeka. I don’t want to out the dude, so just trust me on this on. thempm.com

This little lyrical insight blew me away, though. He says in the tune “I’ve cut enough of that Turkey Red to feed China and a Russian brother.”

Here’s what it means.

Children in Russia hand-picked the first seeds of this famous winter wheat for Kansas. They belonged to Mennonite Colonies preparing to emigrate from the steppes to the America prairies. A peace-loving sect, originally from Holland, the Mennonites had gone to the Crimea from Prussia in 1790 when Catherine the Great offered free lands, military exemption and religious freedom. They prospered until these privileges were threatened in 1871. Three years later they emigrated to Kansas, where the Santa Fe R.R. offered thousands of acres on good terms in McPherson, Harvey, Marion & Reno counties, and where the legislature passed a bill which exempted religious objectors from military service. Within a month after landing in New York the Mennonites planted the red~gold grains their children had selected. The harvest was the first of the great crops of hard Turkey Red and its derivatives that have made Kansas the Granary of the Nation. 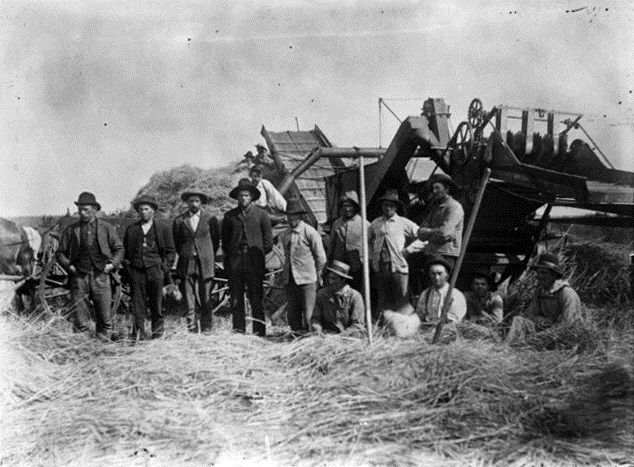